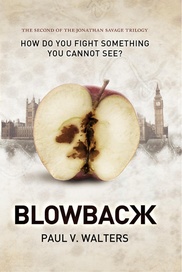 London, 2012. A deadly virus is released on a late night tube. In seconds 23 innocent commuters die a horrible death. Chief inspector Moore of New Scotland Yards terror unit is assigned the case. However, before he can begin the investigation, another attack occurs in a Camden pub and London is now a terrorized city. Bio Defence Inc., a shadowy government organization, is enlisted to work with the terror unit to determine what appears to be an international terror attack on British soil. But is it? Moore suspects that these bio terrorism attacks are somehow connected and go all the way to the highest level of the sitting government. Miranda Phillips is back pulling the strings; hell bent on revenge in any way she can, destroying all her enemies in her quest to eliminate the ultimate prize, Jonathan Savage. Can Moore stop the deadly game of cat and mouse before the U.K. goes into meltdown? Blowback is a thrill a minute roller coaster ride and a fitting follow up to Final Diagnosis.